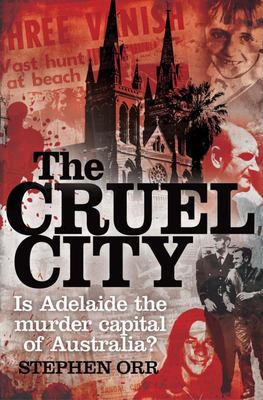 The Cruel City: Is Adelaide the Murder Capital of Australia?

Why is it that Adelaide, a beautiful city of churches and lush gardens, a place renowned for its support of the arts and culture, has become better known as the epicenter of some of Australia's weirdest and most brutal crimes? One of its denizens seeks the answers in this fascinating investigation. Some crimes are so mysterious or ghastly that they take on a legendary status, and Adelaide seems to have had more than its fair share of them. The whole nation remembers the disappearance of the Beaumont children, the ghastly Snowtown murders where the dismembered bodies were found in barrels in a disused bank vault, and the so called Family murders perpetrated by Bevan Spencer van Einem, with its trail of conspiracy theories, rumor, and innuendo, and other crimes just as notorious. Award-winning novelist and journalist Stephen Orr rounds up the infamous crimes of his native city and looks beyond the myth to the tragic sadness, badness and madness of violent crime and its consequences. Why Adelaide? Read Cruel City and find out. This book was shortlisted for the 2011 Commonwealth Writers' Prize and longlisted for the 2011 Miles Franklin.

Stephen Orr is best known as a literary novelist, and is the author of Attempts to Draw Jesus.