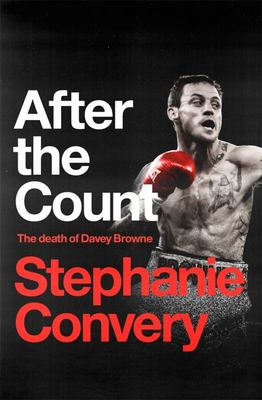 Sydney boxer Davey Browne died in 2015 after being knocked out in the final round of a title fight that he was about to win. Compelling and criticial, this book is an investigation into Davey's death, together with Stephanie Convery's personal narrative about her own boxing story. Who is responsible when someone dies in the ring; the referee, the ringside doctor, the combat sports inspectors, the trainer? Are deaths like this inevitable in a sport where the only sure way to win is to knock your opponent out? Journalist Stephanie Convery has been following Davey's story for years, compelled by the complexities at its heart, and also because when she first heard about it she was training for her own debut amateur boxing contest. There is an inherent contradiction at the heart of boxing - people are attracted to it because it's violent, but don't want to talk about the repercussions of that violence. Stephanie writes about this beautifully, approaching it as a journalist, as a boxing fan, and as a boxer herself. She describes the power and confidence she gains from boxing - which comes explicitly from a place of knowing she can fight back, knowing that she can inflict harm if she needs to. But why aren't boxers, professional and amateur, told more about the potential for and repercussions of concussion and head trauma? There's something going on with boxing in our culture at the moment that's pushing it back into the mainstream, in a way it hasn't been for decades.