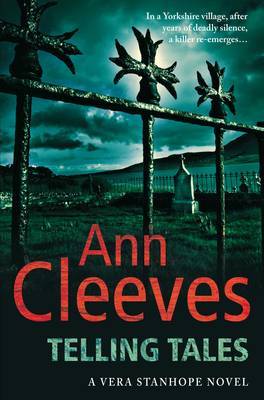 Telling Tales is the second book in Ann Cleeves' Vera Stanhope series -- which is now a major ITV detective drama starring Brenda Blethyn, VERA. Ten years after Jeanie Long was charged with the murder of fifteen-year-old Abigail Mantel, disturbing new evidence proving her innocence emerges in the East Yorkshire village of Elvet. Abigail's killer is still at large. For Emma Bennett, the revelation brings back haunting memories of her vibrant best friend -- and of the fearful winter's day when she had discovered her body lying cold in a ditch. Detective Inspector Vera Stanhope makes fresh inquiries, and the villagers are hauled back to a time they would rather forget. Tensions begin to mount, but are people afraid of the killer, or of their own guilty pasts? Also available in the Vera Stanhope series are The Crow Trap, Hidden Depths, Silent Voices and The Glass Room. Ann Cleeves' Shetland series (BBC television drama SHETLAND) contains five titles, of which Dead Water is the most recent.

Ann Cleeves lives in West Yorkshire with her husband and their two daughters. As a member of the Murder Squad, Ann works with other Northern writers to promote crime fiction. In addition to Telling Tales, she has written three novels of psychological suspense. She is also the author of the Inspector Ramsay novels.