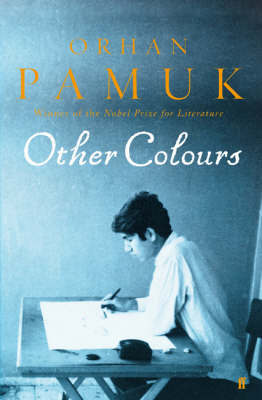 "Other Colours" is a collection of immediate relevance and timeless value, ranging from lyrical autobiography to criticism of literature and culture, from humour to political analysis, from delicate evocations of his friendship with his daughter Ruya to provocative discussions of Eastern and Western art. It also covers Pamuk's recent, high profile, court case. "My Father's Suitcase", Pamuk's 2006 Nobel Lecture, a brilliant illumination of what it means to be a writer, completes the selection from the figure who is now without doubt one of international literature's most eminent and popular figures.

"Pamuk is that rarest of creatures, a fabulist of ideas...In "Other Colors,.".Pamuk gives us several of his many selves in a centrifugal gathering of memory-pieces, sketches, interviews and unexpected flights...[that] feel more like a rich and suggestive set of explorations...His books are, really celebrations of multiplicity...the mysteries they set up are always more delicious than any attempt to solve them...Yet mostly what this collection gives us...is a chance to savor one of the inimitable literary storytellers of our time...Pamuk is taking the world we thought we knew and making it fresh and alive."- Pico Iyer, "New York Times Book Review" "He is the poet of the labyrinth of his own thoughts and conceits, of the fabulous and the gently ambiguous."- Colin Thubron, "The New York Review" "what emerges...is a voice, part playful and part deadly, whose refracted reality a real nightingale might envy."- Richard Eder, "Los Angeles Times Book Review" ""Other Colors" is composed of shrewdly arranged occasional pieces, fragments from journals and other miscellany, edited and at times rewritten to form a remarkably cohesive picture of a literary man...Beyond its clever charm and its wise observations "Other Colors" is a plea to stand back and consider the historical and psychological causes of today's alarming headlines."- Roger Kaplan, "Washington Post Book World" "From the Hardcover edition."

Orhan Pamuk, winner of the Nobel Prize in Literature 2006, is the author of many books, including The White Castle and The Black Book. In 2003 he won the International IMPAC Award for My Name is Red. Istanbul, a memoir of his life in the city, was shortlisted for the BBC FOUR Samuel Johnson Prize.